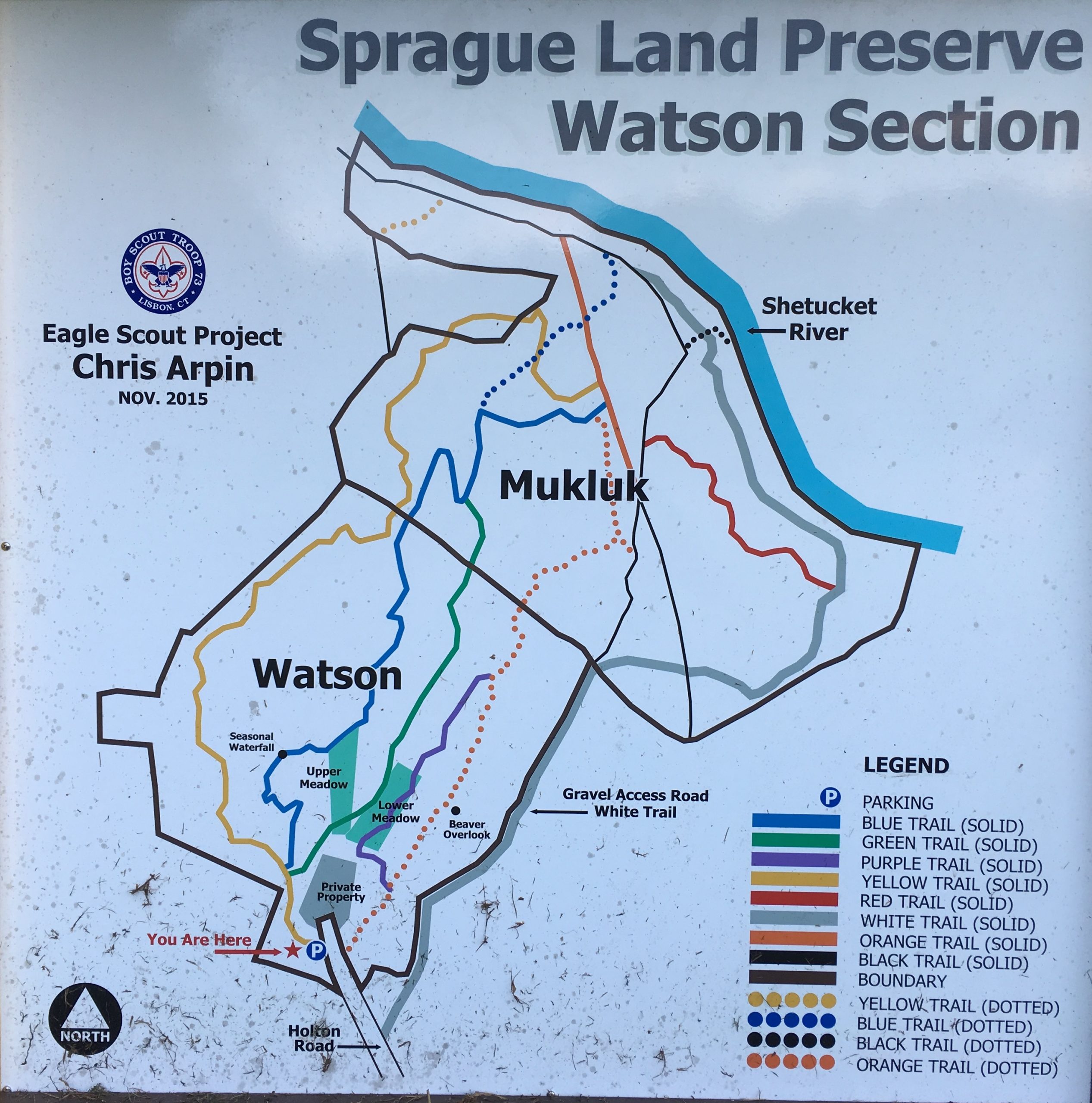 The Sprague Land Preserve is a large and varied property along the Shetucket River.  It is formerly known as the Mukluk Preserve. Most visitors to the Sprague Preserve are awed by the exceptional terrain and habitats in an otherwise unassuming area.  The terrain ranges from mixed lowlands along the river to fern hillsides and hardwood ridgelines.  Thanks to the Friends of the Shetucket River Valley and many other local conservation foundations the property has grown from 270 acres to approximately 625 acres with the addition of the Watson Farm and Robinson properties.
Hiking
There are eleven miles on a network of hiking trails, dirt roads, and utility corridors.  Highlights include the three waterfalls along the blue trail, the overlook on the yellow trail, and Shetucket River views on the white trail.  The trail map above is accurate enough, but can be a bit confusing based on the solid/dot distinctions and the ruggedness of the terrain.  It is also common that trees will fall over the trail and rather than being cut away new paths form around them.
Blue Trail – 1.5 miles
Known as the Waterfall Trail the map is marked with a seasonal waterfall, but there are actually three along its length.  The entire trail is hilly though not quite the extreme climbs of the yellow trail.  From the Watson Section parking follow the yellow trail until you reach a small field and a sign will direct you to the right.  A quarter mile later is the first waterfall (marked on the map) a wide flowing cascade shown in the first photo.  0.6 miles and few hills later is a connector to the yellow trail and 0.4 beyond that is a connector to the green trail.  The second waterfall is a wild jumble of rocks accessed by following a stonewall heading off to the left.  Immediately after the waterfall the trail turns into the Blue Dot, but you’ll want to take a hard right turn to follow the water downstream to the third waterfall .1 miles downhill.  The blue trail empties into the utility corridor which can be taken left to the Shetucket or right to the Mukluk parking.
Yellow Trail – 2 miles
The yellow trail is a long steep climb to the ridge of the Watson property out to an overlook.  Starting from the Watson Section Parking the trail heads uphill for a tenth of a mile until reaching a small field.  This area is extremely wet after rains but stones, logs, and a grate have been placed to help you across.  The trail then heads steeply uphill for a third of a mile until reaching the hilly ridge.  Entirely forested, the trail winds through rock formations and the over the occasional stream. There is a connector trail down to the Blue Trail at 1.1 miles and a stream that may require a careful log crossing at 1.3 miles.  At 1.75 miles you will descend to the bench overlook with a great eastern view.  Immediately past the overlook the trail takes a very steep descent that may require scrambling for some.  The trail connects to the blue dot trail and beyond that another descent to the Orange open utility corridor which can be taken left to the Shetucket or right to the Mukluk parking.
White Trail – 2 miles
Starting as the gravel access road to the Mukluk parking, it’s hard to call this a trail.  Rutted packed earth that you’ll have to share with cars until you’re past the old Mukluk clubhouse and even then it’s still gravel access for the Konow Fishing Camp.  However, the trail does eventually head into the pines along the high banks of the Shetucket River. This section is known as the River Ridge Trail and was put in by as an Eagle Scout Project by Phillip Silva complete with well built bridges. The trail rejoins the gravel road and continues to the Shetucket River dam.  The dam falls outside the boundary of the preserve, but a nice sign thanks you for visiting and welcomes you back. The dam is hydroelectric and occasionally releases water (see boating section).
Red Trail – 0.6 miles
The short red trail is known as the Fairy Trail and has several fairy houses and wood sculptures dotting the trail sides.
Orange Dot
I’ve done the section by the beaver overlook along the stream here and while it does connect to the Watson Section Parking it doesn’t seem to connect to the Blue or Purple Trails though I certainly may have missed it.
Green, Purple, Various Dot Colors
I haven’t really explored these on any of my hikes, often because they don’t connect where I expect them to and don’t have much for interesting sights along them.
The Preserve is also a popular horseback riding destination and unfortunately is occasionally popular with dirtbikes as well.
Looking forward, the First-Selectman of Sprague, Cathy Osten, said, “We’re looking to add some 2,000 more acres and be around the 3,000-acre mark. We will do that through a mix of private donations and land acquisition grants.”  According to the Friends of the Shetucket River Valley, the property is already a “keystone landscape within a 3,000-acre wildlife corridor.”  They too aim to add more land through purchase or easements.  The corridor refers to nearby Bailey’s Ravine at Ayers Gap Preserve and the Mohegan State Forest.  In addition to a bicycle route and road signage from Baltic Village to the Preserve, the 2018 Sprague Plan of Conservation and Development recommends to,

“Work with property owners, State, Friends of Shetucket, and others to acquire additional open space parcels and/or conservation easements along the Shetucket River with the goal to create a trail from Baltic Village to the Sprague Land Preserve that includes handicapped access, exercise equipment, art, education, parking, and river access.”

Mountain Biking
The green-blue-orange-red-white loop seems to be the most popular with mountain bikers as that’s where I’ve crossed paths with them.  But, I haven’t I haven’t tried any of the trails by bike yet.
Boating:
Though this technically falls outside the boundaries of the preserve, the property has over a mile of waterfront along the Shetucket River.  So, I thought I would include boating for this section.  The dam is about 1/3 of a mile from the property and while there is no easy water access from the preserve, there is a portage site just outside the boundary for circumventing the dam.  There are annual events kayaking down the river to Baltic, timed with the release from the dam.

The property has been used for many things since the early 1700’s and was owned by the town’s namesake – William Sprague.  Near the second bridge on the white trail, is a crossing known as “Waldo’s Bridge”  (across the river in Scotland is the Edward Waldo house) which once provided the most direct route for stagecoaches to reach Norwich from the west side of the river. The bridge abutments, as well as the foundations of homes and old tavern, still exist though are difficult to spot. 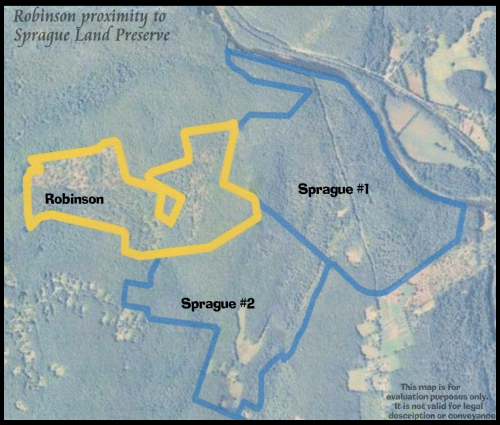 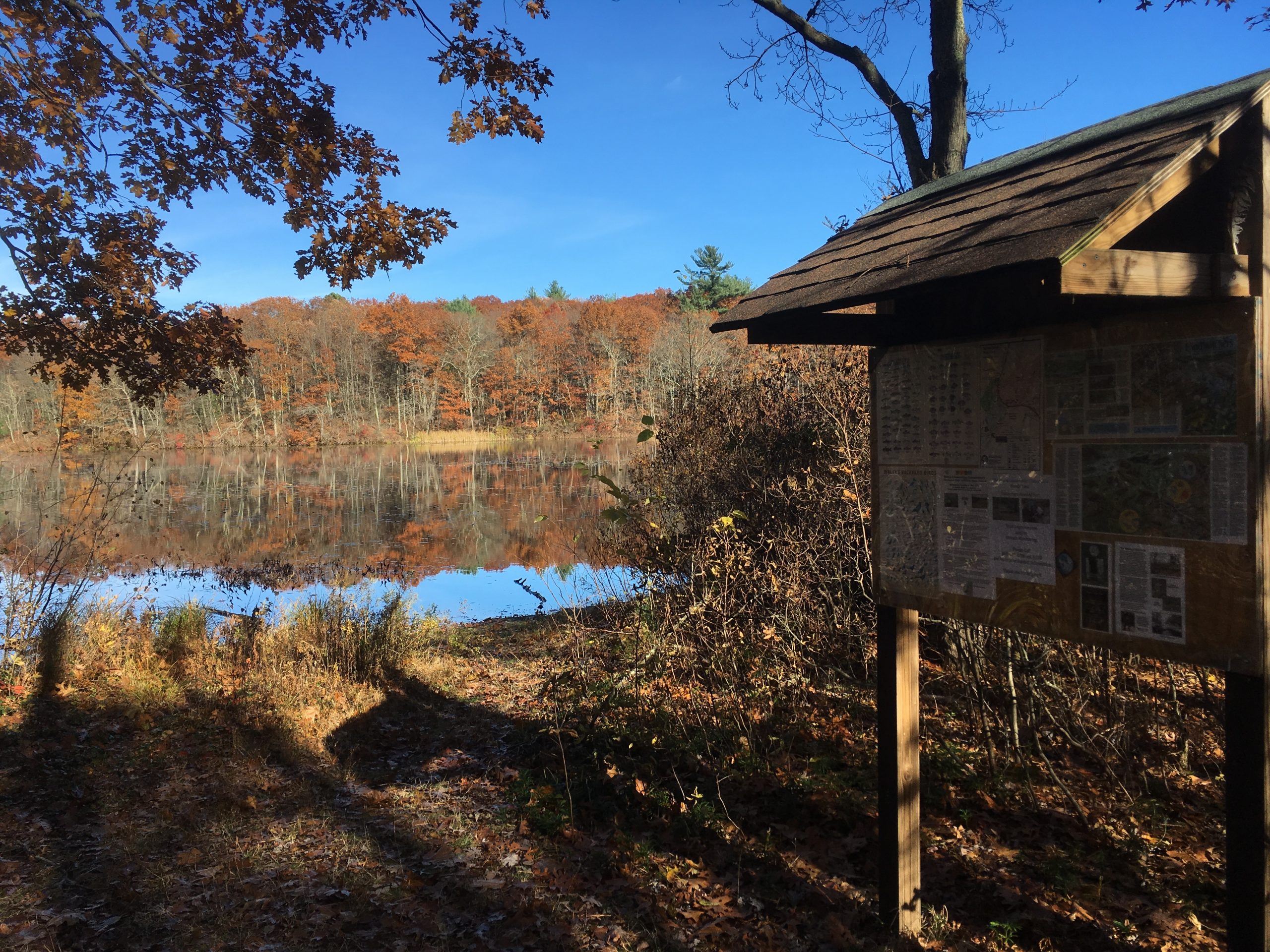 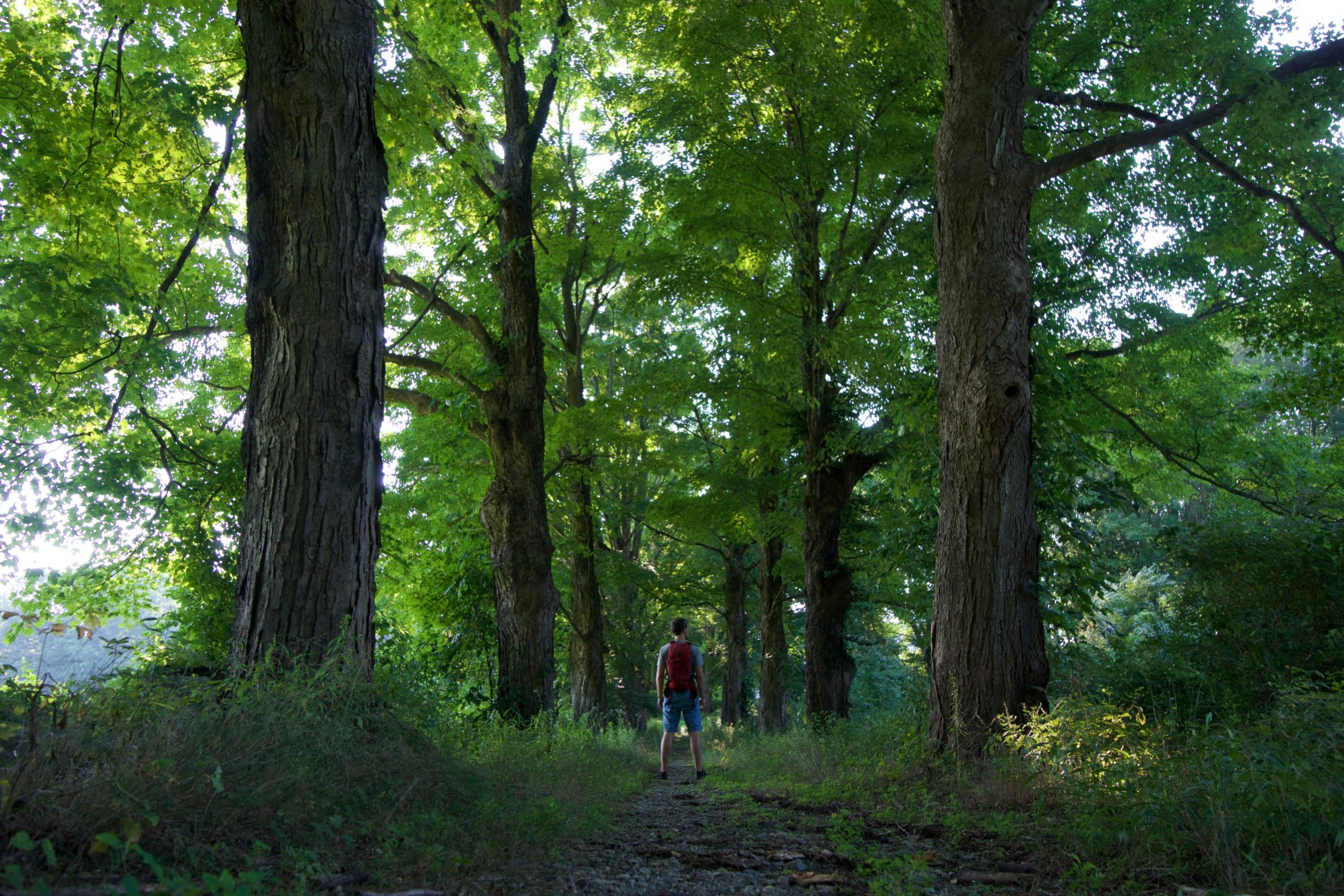 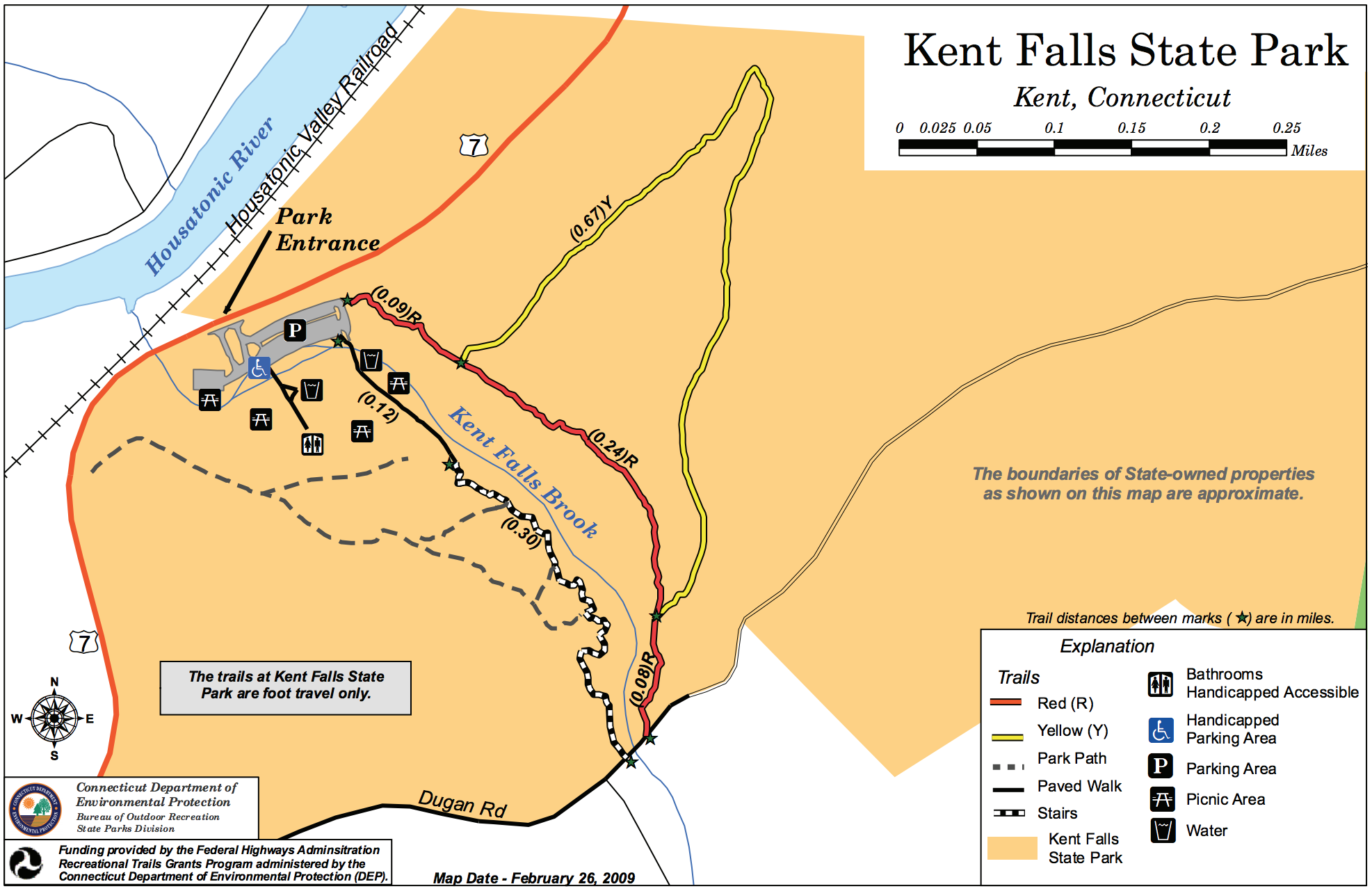