Haddam Island is one of Connecticut’s ‘scenic reserve’ state parks meaning it’s undeveloped and preserved more for unusual or extraordinary natural features than for passive recreation.

I first passed Haddam Island when I paddled down the Connecticut River in the summer of 2019.  I had intended to stop and explore then, but circumstances made it too difficult.  I finally made it back in the spring of 2020 paddling the 3/4s of a mile up from Haddam Meadows.

I found a small beach on the southeast shore of the island and tromped into the interior.  At only 14 acres the island is small, but has plenty to explore.  I soon found a very rough trail through the undergrowth that was not blazed but had occasional markings of different colors.  Plenty of trash has been left or washed up on the island and invasives have taken a strong position.  Bittersweet as thick as my arm has torn down many trees and thorny vines grow in any clearing.

It took me a bit over 10 minutes to make my way the 1/3rd of a mile up island.  At the north end is a nice sandy clearing with a small flag pole and tree swing on a high bank above the water.  Unfortunately a group was drinking around a fire on shore and were arguing politics so I left well enough alone and will have to return another time to explore that part of the island.

Haddam Island became a state park in 1944.  The island was originally named 30 Mile Island and you’ll see many reports that the island was erroneously named since it is only 17 miles from the mouth of the Connecticut River.  However, the island is about 30 miles south of Hartford so the name makes sense given a colonial settlers frame of reference.

In May 1662 the Connecticut Colonial Legislature sent Matthew Allyn and Samuel Wyllys to purchase land along the Connecticut River from the Wangunk Indians who were led by Turramugas, Sepunnomo, Towkishke, Chyamug, and Nabahuit.  On the 22nd they purchased 120 square miles for 30 coats (approx $100 value) from modern day Middletown down to Chester on either side of the river.  The Wangunk reserved the use of 30 Mile Island and about 40 acres in Chester for hunting and fishing purposes.

By the late 1700s settlers had bought most of the island from the American natives and soon set up two successful fishing companies, one on each end of the island. Piers were constructed by sinking large amounts of stone which were brought across the river in the winter by oxen and piled on the ice. The island was also used for grazing cattle and since the water was a natural fence.

The fishing companies must have started to decline because by the 1900s the island was a popular place for public parties, dances, as well as fish frys put American Canoe Association.  Apparently there was even a concessions stand.  The state purchased the property in 1944 but information is sparse. 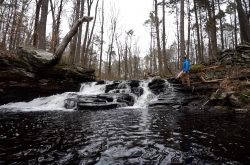 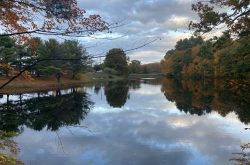 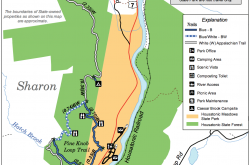