Parking: Pull off for two cars near 1105 Storrs Rd Storrs, CT.  Can also be accessed from either the Mansfield Apartments, Knollwood Apartments, or Birchwood Heights Rd.

Moss Sanctuary is a great spot to get away from the hustling UCONN campus.  There are a well established 2 miles of trails at the sanctuary.  This includes the two white-blazed loop trails.  One around 5 acre Tift Pond and a longer loop through maturing oak-hardwood forest and spring wetlands.  It has often served as an outdoor classroom for both university and town programs according to Matthew Hart, Mansfield’s Town Manager.

The eastern side of the pond contains a spillway that allows drainage from a roughly 10ft stone wall.  A CFPA-built bridge offers views of the mini waterfall effect. The trails around Tift pond provide several points for fishing though it is unknown what species inhabit it.  There are turtles that can be seen sunning themselves on the banks and Canadian geese stopover seasonally.

The backside of the loop (nearer to the Knollwood Apartments) gets away from the noise of Rt. 195 and UCONN’s campus.  A recent spring hike required the use of a stonewall to traverse a flooded section of the trail.

Established as a town park in 2010 and had its ribbon cutting opening in June 2011.  The land was originally owned by UCONN before being given to the Connecticut Forest and Park Association who then gave it to the Town of Mansfield with a permanent conservation easement. Named for Albert E. Moss a professor in the College of Agriculture at UCONN from 1914 to 1942 (he developed the first forest management curriculum as well as planted the spruces along Mirror Lake).

Per the town’s brochure, “This land was a farm dating back to at least 1840, which had a house that once stood at the corner of Route 195 and Birchwood Heights Road. Past owners include both the Tift and Sullivan families. The University bought the property through a series of property exchanges completed in the 1950s, and in 1989 designated the land as the Albert E. Moss Forest, Wildflower and Wildlife Sanctuary in honor of Professor Moss. In 2010, the Town of Mansfield purchased the Sanctuary to preserve its diverse habitats and to serve as a “village woods” offering walking trails for many nearby residents.

The pond was created between 1846 and 1866, as an auxiliary water source for the silk mill, owned by John and George Hanks, located a mile downstream. The original silk mill (1810) is reportedly the first such mill in the U.S. and is now at the Henry Ford Museum located in Deerborn, Michigan.” 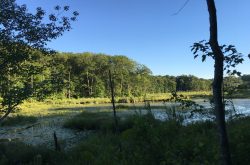 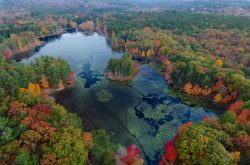 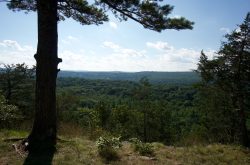