Small area next to the Falls in Norwich, CT

Yantic Falls is one of the most powerful in the state (check out these photos of it after heavy rains) over a nearly 40 ft drop.  Next to the parking area is a small overlook of man-made dam as well as the natural rock fall.

Crossing the Yantic River is a pedestrian bridge that provides another view over the falls.  Continuing across the river reaches Monroe St, but also the rocks above the falls from which the Narragansetts supposedly lept.  There are no trails and not much for hiking here, but there is a small area on either side of the falls for exploration.

From the Distracted Wanderer site, “As the story goes, Miantonomo, Sachem of the Narragansetts, led 900 of his warriors in what was to be a surprise attack on the Mohegans at Shetucket, the Mohegan capital near the City of Kings. The night before the battle, Mohegan scouts in the area observed the advancing enemy and carried the intelligence back to Uncas who formed a plan.

Uncas knew he didn’t have enough warriors to battle Miantonomo but he was a brave chief and would die for his people if need be; if one man could save many then he was willing to make that sacrifice. He told his braves that he would ask Miantonomo to fight one-on-one and if Miantonomo refused, he would drop to the ground as a signal for them to fire arrows into the enemy and then charge them hoping that the surprise would give them the advantage against the higher numbers.

Chief Uncas met the Narragansett chief between the lines of battle in the area that is now known as East Great Plain and appealed to him to prevent blood loss between both tribes by a single combat between the two leaders instead. When Miantonomo contemptuously rejected Uncas’ proposal, the Mohegan chief immediately dropped to the ground and the Narragansetts were met with a hail of arrows before Chief Uncas jumped to his feet and led his brave warriors in a charge.

Caught totally off-guard, the Narragansetts ran from the charging Mohegans with some fleeing along their familiar route while others, unfamiliar with the territory, unknowingly reached the high treacherous cliffs of Yantic Falls. Rather than surrender to the Mohegans, Miantonomo leapt across the gorge and managed to land on the other side, injuring his leg in the process. Others of his tribe attempted to leap the chasm but were unsuccessful and plunged to their death onto the rocks in the abyss below while others simply surrendered and became prisoners of the Mohegans.”

Posted in The Rest 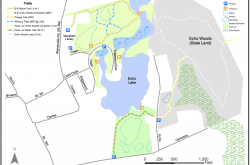